Everyone’s talking about Game of Thrones, a show that does deserve the plaudits it’s picked up so far in its award winning run. But in the advent of ‘Throne Fever’ as the new season kicks off, I can’t help but be the one who goes against the grain. Maybe it’s because watching here in Australia is a pain in the ass, maybe it’s Netflix taking up all my time…

We’re only less than two weeks away from arguably the biggest movie of the year in Avengers: Age of Ultron, but the party has already started for many fans with the new Netflix series Daredevil, starring Charlie Cox as Matt Murdock, the blind lawyer by day and vigilante by night. If that sounds kinda familiar, yes it isn’t the first time Daredevil has graced the screen (though many of us care not for the past) and it’s certainly not the only vigilante crime fighter appearing on our screens at the moment. 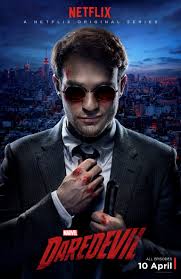 But this one is … different. Though set in the Marvel Cinematic Universe, Daredevil as an entity prides itself on its darker and more violent setting, that of Hell’s Kitchen in NYC. Crime is rampant, villains are working together, corrupt cops roam the streets, it’s as far removed from what we’ve seen from Marvel on the big screen as you can get. You know, besides exposed bone and blood splatters that hark back to Mortal Kombat than Captain America: The Winter Soldier.

There’s also the distinct difference of being a Netflix product, allowing Marvel to release the entire series in one hit instead of weekly, as in their other TV products Agents of S.H.I.E.L.D and Agent Carter. Those seem quite tame again by comparison, though a darker edge has circled Phil and his new team of S.H.I.E.L.D agents during season 2, but there’s an important lesson here that Marvel has learnt since stepping into the TV realm from its successful movie business.

For one, Daredevil doesn’t rely on the movie universe to set up anything. At all. Agents of S.H.E.I.L.D took over half a season before it came good as Marvel waited on the massive universal shift in its product caused by the ending to Cap’s last movie, whilst the series has also had cameos from recurring movie characters whilst (possibly) setting up other characters for big screen roles (hello Inhumans!). Daredevil has the luxury of being entirely its own thing, no references or need to setup anything whatsoever. Well, almost.

Truth be told, Daredevil is just a small part of a larger Netflix whole. Three other characters will be unleashed onto the internet service within the next few years before eventually coming together to work with Murdock himself in creating ‘The Defenders’. That team features Luke Cage, Iron Fist and Jessica Jones, who’s next on the release list. Daredevil has supposedly already introduced recurring characters who may (or may not) appear in those other three properties before the big team up.

How The Defenders will tie into Marvel’s cinematic universe as a whole is still completely uncertain, despite many suggestions they could all appear in Marvel’s Captain America: Civil War story arc, or perhaps the next Avengers movie. For now though I’m happy to be along for the ride, watching what’s easily Marvel’s greatest achievement so far, which is saying something considering the growing box office takings of every movie since Iron Man came out in what seems like forever ago.

It’s a well put together production that doesn’t rely on CGI to put across the ‘abilities’ of Daredevil himself, it isn’t dark just for the sake of being it compared to many other shows and movies of late (Hell’s Kitchen wouldn’t be right without it anyway) and the acting and action come together crisply. It isn’t without its problems (some of the dialogue can be a bit cheesy) but with Vincent D’Onofrio putting in a stellar performance each episode as Wilson Fisk, aka Kingpin, and Cox himself holding his own as Murdock, the show holds its own defies expectation. Episode 2 is a sure standout for best action sequence of anything ever, just saying.

The fact that Disney allowed Marvel the opportunity to go back to an already failed product (the Daredevil movie didn’t exactly do all that well, if you recall), reboot it into a TV series which is essentially the same setup method they used to put the Avengers together, give it a much darker tone than anything else they’ve released so far AND release it all in one hit on Netflix … that’s a bolder move than Stark creating a new form of AI, but thankfully this Netflix partnership hasn’t turned into some kind of evil weapon bent on destroying humanity.

Well, not yet at least.

So if paying the amazingly expensive ripoff prices of Foxtel to watch Game of Thrones is putting you off, I implore you, go sign up for free for a month of Netflix and watch Daredevil from start to finish. Then watch it again whilst you wait for The Avengers to come out next week. Then watch it again after that, because why not that’s why. Then kindly ask someone at Channel 7 to give Netflix the rights to S.H.E.I.L.D and Agent Carter to we Aussies can watch all that too!