Shall we continue our flashback to the past 12 months? Yes, we shall. And if you missed Part One, click here!

It is impossible for me to choose just one moment of Soma that stood out from the rest of the game. This narrative driven survival horror title shocked and moved me emotionally from beginning to end.

Soma combined my two favourite elements of gaming: horror and great storytelling. I enjoy horror games because they allow you to be immersed into the horror like no other medium can, and the gr 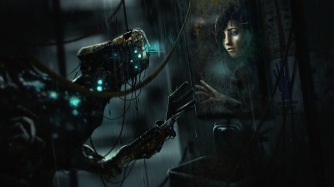 eat writing allowed me to truly feel for Simon when he faced hardships aboard PATHOS-II. When Simon felt he had been misled and screamed “fuck you” at Catherine I wanted to scream it too. Towards the end, as Simon faced the realisation that he was the last being alive on Earth I truly felt isolated and alone.

No game has moved me like this since Telltale’s The Walking Dead series. I give full credit to developer Frictional Games for creating this bleak and philosophical world and a protagonist who actually expressed himself appropriately to the events occurring around him. That is why the ten hours or so it took me to complete Soma will be remembered as my top gaming moment of the year. – Mike

TV hasn’t really capture me over the last few years. That’s partly because I don’t watch free to air TV anymore, but also since there just isn’t all that much out there that deserves my attention, especially since Breaking Bad and Dexter wrapped up a few years back. So when Marvel announced a partnership with Netflix to produce a number of shows based on the likes of Daredevil and Jessica Jones, I was curious what would come of them.

Not that I wasn’t expecting them to be anything but good, considering 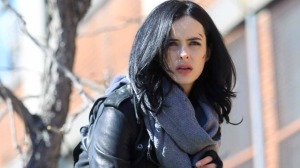 Marvel’s track record of late, but the eventual results of the ‘release them all in one go’ experiment for a superhero show were nothing short of spectacular. To say Daredevil and Jessica Jones filled me with confidence for the rest of the projects (Iron Fist and Luke Cage, followed by The Defenders) is the understatement of understatements.

Crunching action sequences, characters you actually felt for, dialogue that at times felt on edge and others as light hearted as the best of their comic

book counterparts, both shows hit the right marks. It’s especially important considering Daredevil technically stood as a reboot of a failed movie franchise, whilst Jessica Jones was an even riskier move; a noir detective thriller with a character that could control you with the sound of his voice. Also, Doctor Who as a bad guy.

But with Marvel’s other franchises moving closer to the supernatural and magical elements of its roots, and Agents of S.H.I.E.L.D growing, it wasn’t really all that far fetched. But the edgier tone, the darker mentality of these characters and the world around them stood them head and shoulders above anything else Marvel produced this year. As for which was the better of the two, based on performance and cast the edge goes to Jessica Jones, but Daredevil isn’t all that far behind (Also, Season 2 starts in March! Excite!) – Mark

THE STAR WAR: EPISODE 7.5: THE FORCE AWAKENS BEFORE ITS ALARM GOES OFF

No 2015 best of list would be complete without the movie everyone is still talking about, and for good reason. I think Mike and I can both agree that our experience in watching J.J. Abrams somewhat rebooted/somewhat rehashing of Star Wars was like walking into a cinema for the first time as a child all over again. Magical, inspiring, loud noises … just awesome, really.

But the thing with The Force Awakens, movie aside, was the incredible build up that Disney put together. It all started with that gleeful first trailer from earlier this year. Mike, take it away…

I got Goosebumps the first time I heard Han Solo say “Chewie we’re home”. I don’t know where home is exactly, but I fully grasped its deeper meaning.

Star Wars is home. The franchise is back with a new trilogy and an undisclosed number of stand-alone films. This is something I had dreamed of since I first viewed the original trilogy as a twelve years old child. I had viewed Star Wars as a dying franchise that George Lucas would take to the grave, but now its future looks brighter than its past. – Mike 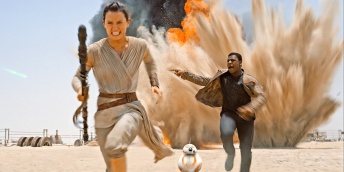 Some say the lead up to the eventual release of the film was a little overbearing. A teaser here or there, a first massive wave of toys, endless chatter from fans over eager to find out what was in store for them. By the time the movie eventual hit, it was like an overarching tidal wave of emotions. Happiness, pride, adoration, a little uncertainty, confusion … they all wrapped together into a fan base once more brought back to life, better and shinier than ever before.

The film itself is an ode to the past and a glance towards the future, a future that now looks far more in the right hands than it has been since the credits rolled on Jedi back in ’82. The fact that we’re all here, nearing a month after release yet still talking about those moments, still gushing with glee at our fifth our sixth (or more) viewings and still laughing at Emo Kylo jokes, just goes to show that it all hit the right satisfying number of notes. We won’t forget The Force Awakens any time soon.

Oh, and one last thing. Rey is awesome. – Mark

So that’s a wrap on 2015! Next up, Mike and Mark will take a crack at what they’ll likely be enjoying across the year ahead. In the meantime, was there anything we missed that you enjoyed from last year? Let us know in the comments below, we’d love to hear from you.