Nintendo have officially confirmed this week that they will be embarking on a new mobile campaign with Japanese veterans DeNA, which has blown up the internet with ideas and suggestions on which Nintendo IP’s should make the jump.

So we thought yeah, why not join in on the debate. What’s the harm in imagining. So here’s our Top 10 ideas Nintendo and DeNA would be wise to consider. Or not. You know, no biggie.

It’s rather surprising that Nintendo hasn’t brought back the Mario Paint franchise sooner, though there have been other Nintendo IP’s using similar designs (such as the 3DS title, Pokemon Art Academy). What better place to revitalise the brand than on an iPad, where the paint brush becomes your finger tips … or something like that. Both iOS and Android online stores have plenty of painting programs for kids, but a Nintendo themed app would certainly appeal to many.

Mario Party 10 has left a few people a little perplexed, though there are plenty of good ideas to be hand there. One thing that mobile games don’t alway strive for, too, is the ability to play local multiplayer games with other people and their devices. Mario Party needs a shakeup, so why not combine this concept with the party atmosphere and create a board game split across multiple phones or tablets. 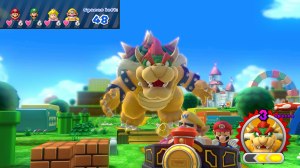 The Wii U experiment could just as easily become an iOS experiment. Nintendoland originally served as hands-on advertising for what the Wii U gamepad could do, and though its mini-games weren’t always perfectly designed (or fun, in the same vein as Mario Party really), an iOS iteration might be a good way to reintroduce characters new and old (or forgotten) to a mobile audience. Not that Nintendo characters really need another introduction, but you get our meaning.

If Nintendo and Game Freak are reluctant to create a proper Pokemon title for mobile platforms, it makes perfect sense to still incorporate other existing Pokemon titles. Puzzle games aside, Pokemon Stadium would be an interesting way of allowing fans to play and fight with their favourite Pokemon characters, and if they can find a way, why not have it connect to your 3DS in some way too. Perhaps a mobile Pokemon storage unit would also be worthwhile looking into.

This one might be a long shot, but since Mario Kart has lent itself rather well to arcades, a mobile version of the game wouldn’t be too far of a stretch. Take your racer with you on the road and race against people locally or online as in the 3DS rendition, but bring along with it the option of uploading footage or time trial scores to Facebook and calling out racers on Twitter could open the series out to new areas. If the arcade series continues in the future, you could also upload your mobile racer to the arcade machine and continue the journey there.

What better puzzle game to unleash to the mobile market. Dr. Mario would lend itself perfectly to the current trend of free to play puzzle games that require either connecting with other players to unlock the more difficult paths through the game, or purchasing items to make your puzzle experience optionally easier. Dr. Mario fits the design criteria in that sense, though will Nintendo really allow those kinds of free to play models that DeNA are known for?

Think about it. Nintendo started as a card making manufacturer, so why not hark back to that era by providing a mobile mini-game collection based on the very cards that started it all. Of course, you can then have a whole bunch of cards based on Nintendo characters, maybe add new game types and rule sets. The options are endless.

This one could go one of two ways, but no, we’re not talking about Donkey Kong Country. We’re talking more along the lines of the Donkey Kong arcade game, or more specifically the Game Boy update from many years ago. That game opened the franchise up a little by introducing new mechanics and levels, some of which progressed into the more recent Mario vs Donkey Kong series. Though that franchise hasn’t been doing all that well of late despite some decent concepts, maybe stepping back into more traditional platforming action would be a good idea for a mobile title.

This one is rather obvious. Since the Game & Watch Gallery series ended many, many years ago, there hasn’t been a proper collection of the classic watch based based for some time (despite a handful released on 3DS over the years). A good place to re-release them either collectively or separately would be on mobile, especially for anyone who hasn’t found them on other platforms, and perhaps including some new touch based functions.

The next obvious answer, and our #1 idea, would be for an entirely new IP and/or genre featuring Nintendo characters. It’s so easy to fall back on existing IP and ‘reprogram’ them for a new market (hello Mario Party again!) but with some fresh eyes looking them over, perhaps some brand new characters or worlds to play within would be the perfect solution to this new marriage. Nintendo does have a minor tendency of lending their characters to new concepts (say, the Olympics series or their recent collaboration with puzzle/rpg hybrid Puzzle and Dragons), and there are a few genres out there that Nintendo hasn’t mined just yet (can you imagine a Nintendo version of, say, Clash of Clans?)

That’s our ideas, but what about yours? Hit us up in the comments section below and tell us what you think Nintendo and DeNA should be working on for mobile titles. Are there any particular IP’s you’d like to see get the mobile treatment?